Sarah’s academic books address a range of topics and draw on multiple research methods. Despite this diversity, they all reflect several commitments also evident in her teaching and community projects. She grounds her work in collaborative knowledge-making; her scholarship builds connections between cultural resources from the liberal arts (including archives from the past) and important social issues of today.

Visit your local library for copies or, in many cases, download an open access version of (portions of) these books for free, as indicated below. 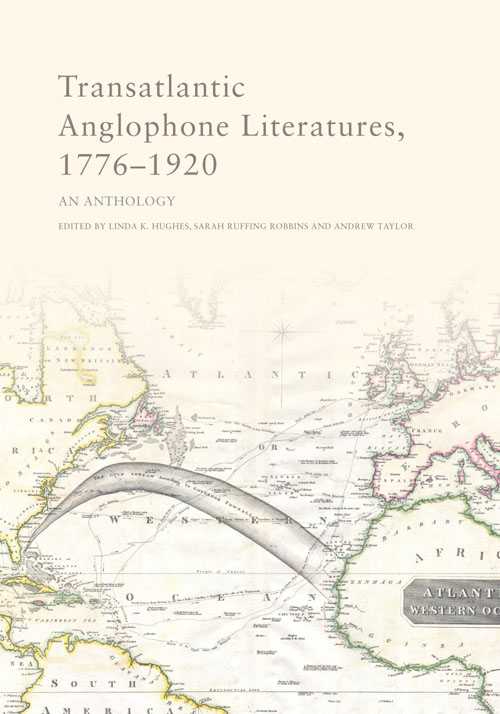 This new anthology presents a wide array primary texts for teaching transatlantic literatures of the long nineteenth century. Organized around ten themes, the collection includes an introductory essay for each section, underscoring its key concepts and historical trends. Every individual primary text entry is introduced by an explanatory headnote and contextualized with brief footnotes to support student readers. Dozens of illustrations drawn from a wide array of transatlantic publications illuminate individual texts and themes intertextually.
Spotlighting geographic reach, the collection embraces authors, texts, and topics from the Caribbean, Canada, and Africa as well as the US and the UK. The anthology honors translingualism as crucial to transatlantic culture, so the collection incorporates a number of texts that circulated in multiple languages; also, paratextual explanatory materials promote critical examination of how study of “Anglophone” literatures should consider issues of power and privilege in the transatlantic circulation of writings in English. Highlighting race, ethnic, gender, and class diversity, every thematic section draws from important scholarly interventions in the field such as Black, Green, and Red Atlantic studies.

Learning Legacies spotlights women writer-educators of the past whose stories can inspire community building today. One chapter highlights work by African American teachers and students from Spelman College’s founding years and their intellectual heirs at the institution now. Another revisits settlement house collaborative learning in urban Chicago and traces the influence of Jane Addams and others at Hull-House in current community projects. Robbins also honors Native women educators’ nurturing models—especially those emerging as resistance to the boarding school assimilation program. Overall, Learning Legacies celebrates women’s leadership in American education and in writing about that vital work.​ Available in hardback and paper from the University of Michigan Press and other vendors, this book can also be read for free online here as part of the University of Michigan’s New Public Scholarship series.

Teaching Transatlanticism illustrates Sarah’s longstanding commitment to locating the study of American literature and culture in a global context. Co-edited with Linda Hughes, the essay collection gathers examples from colleagues who have been developing new approaches to teaching transatlantic cultural studies with a print culture emphasis. Chapter authors come from both sides of the Atlantic and work in a range of institution types. A companion website provides additional resources for educators, whether they aim to create entire course syllabi on Anglo-American transatlanticism or just want to enrich current nationally organized curriculum with transatlantic modules.

Co-edited with historian Ann Pullen, Nellie Arnott’s Writings on Angola, 1905-1913 exemplifies Sarah’s sustained participation in the movement to recover important records of women’s history that have been under-examined. Arnott’s writings illuminate the experiences of an American missionary teacher serving in a region then governed by a Portuguese colonial power. As such, these highly personal archival records complicate our understandings of women’s roles in hybrid, intersectional spaces where some elements of their identity might empower them, even as others limited their access to social influence. This critical edition won an honorable mention citation in the 2012 triennial awards competition of the Society for the Study of American Women Writers. One introductory essay from the edition is available free online here. 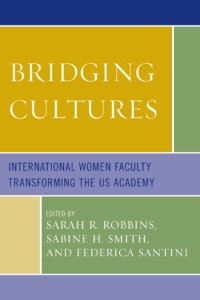 Bridging Cultures: International Women Faculty Transforming the US Academy brings together the diverse voices and multi-faceted experiences of international faculty women seeking to find a productive space in US universities. Blending personal memoirs with academic analysis shaped by their diverse disciplinary affiliations, women teacher-scholars describe challenges they have faced in adapting to American higher education settings. Response essays—including several by male academics—broaden the conversation and invite readers to situate the authors’ stories in broader contexts of intercultural learning. Excerpts from this book can be accessed via the open-access Journal of Transnational American Studies. 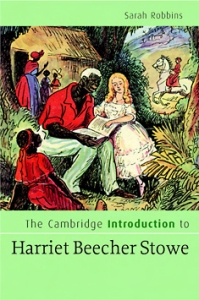 Sarah’s teaching and scholarship often focus on the rhetorical features of women’s literature as it seeks to promote social change. Thus, her approaches for teaching figures like Harriet Beecher Stowe situate familiar texts like Uncle Tom’s Cabin in conversation with lesser-known publications and invite students to analyze authors like Stowe herself as both professional writers in a particular historical era and would-be change agents. In The Cambridge Introduction to Harriet Beecher Stowe, Sarah draws on her own careful reading of Stowe’s many publications, the author’s complex life experiences, and the responses of other scholars to Stowe’s long career. Currently, with Dr. Barbara McCaskill and Dr. Gabrielle Kiriloff, Sarah is building on this previous scholarship by co-editing Stowe’s Dred: A Tale of the Great Dismal Swamp, as part of the Oxford University Press project assembling a complete collection of the famous nineteenth-century author’s works.

One of Sarah’s goals for collaborative work with schoolteachers has always been to bring their voices into dialogue with other educators through publication projects. Teachers’ Writing Groups exemplifies this ongoing agenda. Conceived in collaboration with teachers affiliated with the Kennesaw Mountain Writing Project (a National Writing Project site for which Sarah served as founding director), TWG is now available here through Kennesaw State’s digital commons initiative. The collection’s teacher-authors each share an individual story of their classroom practice. Each writing group also co-authored an essay reflecting on their team’s process of supporting each other and reflecting on how professional development situated within collaborative writing enhances our understanding of our own practices while helping us grow as writers.

Writing Our Communities: Local Learning and Public Culture, co-published by the National Council of Teachers of English and the National Writing Project, grew out of a public humanities project funded primarily by the National Endowment for the Humanities (NEH). Co-edited by classroom teacher Dave Winter, this collection of resources provides ready-to-use classroom resources for engaging students in interdisciplinary research and writing about the places where they live. Each chapter includes ideas for re-purposing curriculum materials for different disciplines and grade levels. Teacher-authors also reflect on the implications of individual lessons, units, and courses they developed as steps promoting open-ended inquiry and project-based learning. 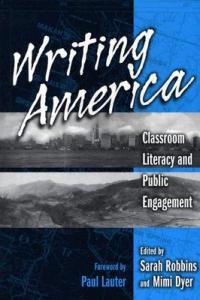 Writing America: Classroom Literacy and Public Engagement presents stories by teachers who participated in the NEH-funded Keeping and Creating American Communities project. Co-published by NWP and Teachers College Press, Writing America takes readers inside classrooms ranging from middle school through university. Each chapter also looks beyond its instructional setting to position students and teachers in a public, culture-making context. The shared vision behind curricular literacies these teachers cultivate with their students show how learners can become empowered community members. 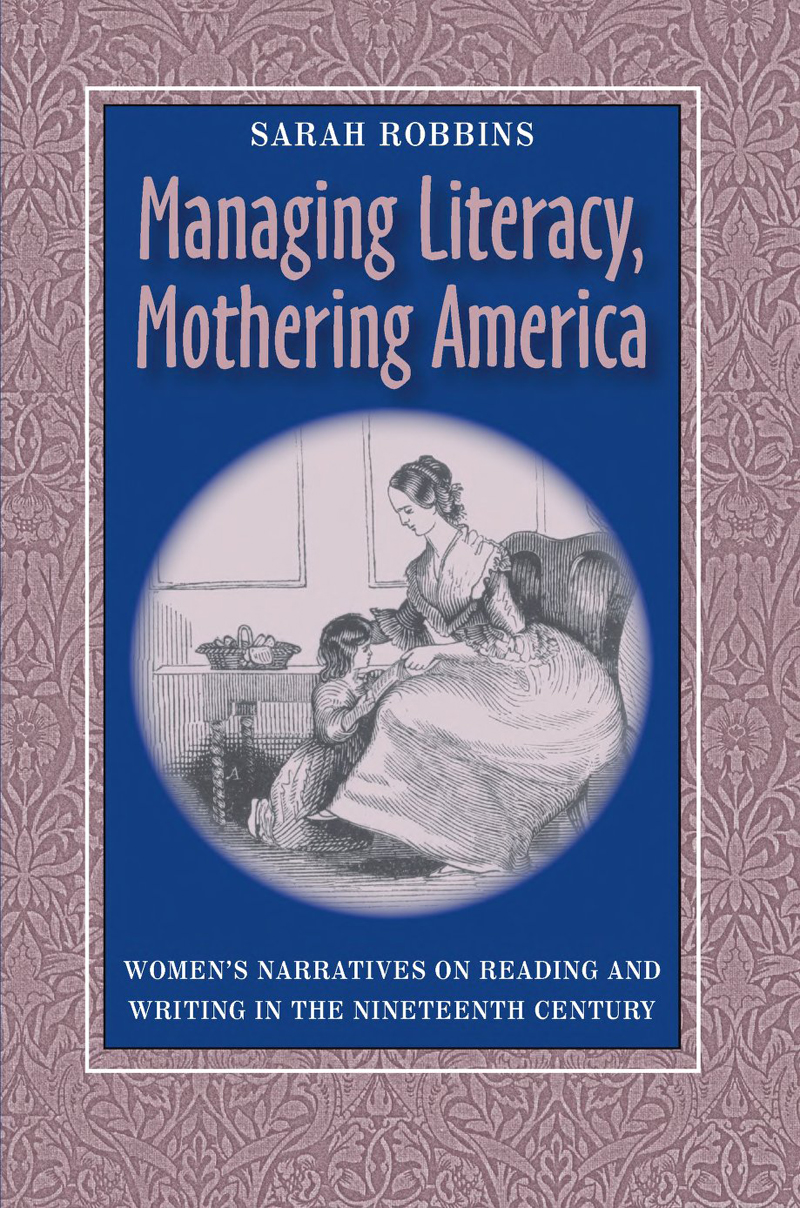 Managing Literacy, Mothering America, Sarah’s first academic monograph, won a Choice award from the American Library Association. This text is available digitally from its original publisher, the University of Pittsburgh Press, here. Managing Literacy, Mothering America traces links between nineteenth-century US women’s home-based and domestically-oriented teaching and their efforts to claim social influence during an era when avenues like voting were still closed to them. Sarah analyzes literary and educational contributions by writers ranging from Lydia Sigourney and Harriet Beecher Stowe and Frances E. W. Harper to authorial heirs who adapted the genre to away-from-home contexts for shaping American culture. This book has been widely cited for its contributions to fields ranging from American literature to gender studies and the history of American education.

One thought on “Books”