This single-word naming of a new exhibit at the National Museum of the American Indian (NMAI) tellingly links up with a crucial claim staked out both by the museum’s very presence on the National Mall and by this exhibition. Specifically, the NMAI rightfully asserts, Native Americans are indeed “Americans,” people whose lives and social interactions situate them all around us, as members of our national community. Thus, the living presence and social significance of indigenous peoples among us needs to be celebrated as only an institution supported by the collective wisdom of Native peoples and the resources of the Smithsonian—located at the center of the nation’s capital—can do. 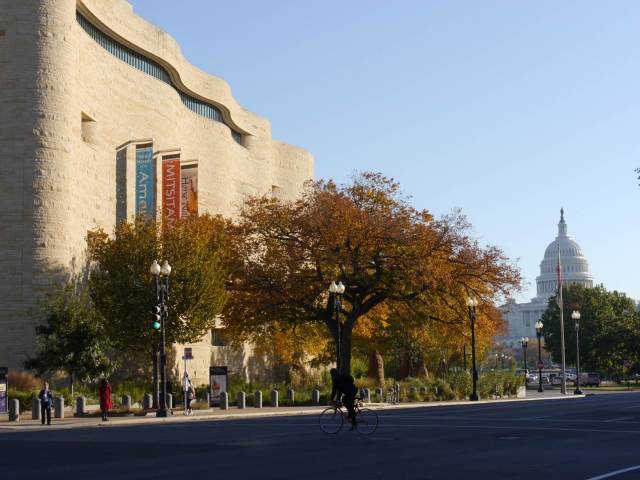 “Americans” also calls on those of us in the majority culture to cast a critical eye on our own past (and ongoing) representations of Native peoples’ place in our history and culture. As the exhibit’s strategic story-telling demonstrates, we have been surrounding ourselves with images of Indians from the very beginning of our colonization of the Americas. But we’ve too often used those representations to mis-represent. Or, at best, we’ve employed these images to tell only a partial or self-serving story. We need to confront both this dominant narrative that stereotypes Indians and the counter-narratives that the NMAI presents, in “Americans,” as correctives.

Visiting this new presentation at the museum recently, I was excited by its rhetorically powerful approaches for making this case through the exhibit’s basic design plan and specific narrative texts revising several “familiar” historical accounts of Native-white interaction: the mythologizing of Pocahontas, accounts of the early nineteenth-century Removals, and tales of the Indian Wars.

Image and Myth in the Central Gallery

When visitors first walk into the “Americans” exhibit, they encounter artifacts of the dominant narrative of Indians all around us. In panel after panel, image after image, we see often-demeaning stereotypes that have been circulated about Native Americans. Indians are mascots for sports organizations ranging from the controversial DC area’s NFL “Redskins” to major universities’ sports teams to small-town high schools crafting self-presentations via Indian-linked naming of themselves. Indians have been depicted as weapons in the American military arsenal like the Tomahawk missile and “Savage” bullets.

Photo from the NMAI

Indians are central to the Thanksgiving mythology we invoke every fall. Early twentieth-century seasonal magazine covers mounted in the exhibit (such as 1920s’ issues of the Saturday Evening Post and Country Gentleman) remind us that the role assigned to Indians within this national narrative has frequently stereotyped them as savages, even when the idea of sharing a common dining table is at the center of this tale.

The Jeep Cherokee gives us a great ride over rough terrain, inviting us to see ourselves as tough travelers. Indians have presented a call for environmental consciousness via a tearful face crying over lost natural resources that simultaneously suggests Indians themselves are in danger of disappearing from the American landscape. Overall, in a pattern parallel to Toni Morrison’s Playing in the Dark argument about how blackness is essential to the construction of white identity and dominance in our national culture, the central gallery of “Americans” shows that Indians are necessary to such whites-supporting myths as the cowboy hero and its extension into a vision of (white) American exceptionalism.

Kevin Gover (Pawnee), NMAI director, summed up the exhibit’s interplay between image and history in an aspirational wish for thoughtful visitor response: “Our hope is that visitors will come away from the exhibition not only more aware of the pervasive presence of Indian imagery and words in their lives, but also with a new understanding of important historical events they thought they knew.” The second half of Gover’s “hope” statement references an element of the exhibition that ably “talks back” the images of the central gallery: three side galleries, each re-visiting and un-doing familiar accounts of historical interactions between Indians and whites. One of these pushes us to confront the actual lived history of Pocahontas—not the romanticized one. Another highlights aspects of the Indian Removal that are often marginalized in (or even excluded from) textbooks, such as Thomas Jefferson’s early advocacy for Removal (and even possible eradication) of Native people. Andrew Jackson infamously enacted the policy, but he didn’t (this gallery insists) originate the ideology behind it. Similarly, though we may think we know what happened at Custer’s Last Stand, a third gallery complicates that picture by situating the Battle of Little Bighorn in a larger, more complicated context. 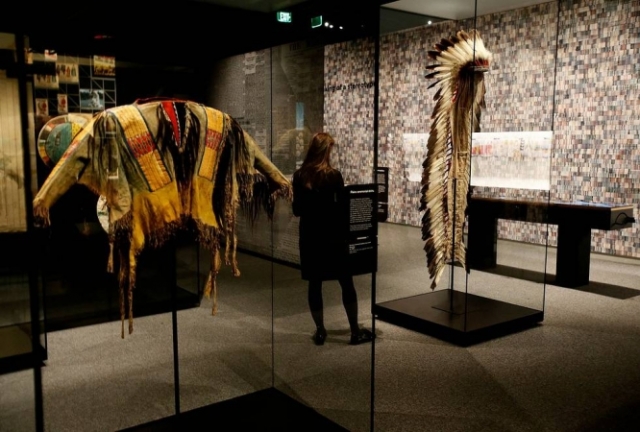 If the “Americans” exhibit offered up only the many images of Indians in its central gallery, its impact could still be memorable, its lessons worthwhile. However, as I’ve outlined in one chapter of my Learning Legacies book, early reviews of the NMAI’s initial exhibitions weren’t always able to access the counter-narrative rhetoric of a display like the “Americans” central gallery. Some initial NMAI visitors and reviewers, trained in white knowledge systems for recording cultural histories, had trouble processing stories that placed a greater emphasis on recurring truths—on patterns of behavior that crossed temporal boundaries. So, when some of the first visitors to initial NMAI exhibits passed by panels linking settler colonialism’s use of both guns and Bibles, over and over, to constrain Indian resistance, the rhetorical message didn’t always hit its intended mark.  Accordingly, critics faulted such thematic strategies as displaying interaction between whites and indigenous peoples in American spaces for not being clearly grounded in specific historical moments and timelines.

Later exhibits such as the carefully chronological revisiting of numerous treaties between Indians and whites in “Nation to Nation” took a more traditional approach. Walking through that series of displays, a visitor schooled in Euro-centric knowledge systems could certainly trace particular sequences of treaties and their repeated approaches for denying Native people’s actual national sovereignty even as language within those documents seemingly acknowledged it. But some of the power of aesthetic and affective communication that a film like “Who We Are” invokes in the Lelawi Theater may have been lost in this shift to a more chronological approach to revisiting encounters between Indians and colonizers.

“Americans” has chosen what I found to be a productive hybrid strategy. By yoking a thematic display in its central gallery with historical narratives that correct the recurring mythology evident in the thematic central gallery, this new NMAI exhibit achieves a dialogic interplay that would be hard to miss. The contrast between the central gallery’s recurring representations of Indians and the three offshoot sections’ re-tellings forces visitors like me—white Americans who may have bought the Indian Princess perfume or shed a tear “with” the Indian chief crying over environmental sins—to confront the ways that we have not only oppressed Indians but also created versions of our interactions that seek to mask those very oppressions.

“Americans” like me have constructed our sense of self and our vision of “American” history in part by depicting Native peoples and our ongoing connections with them in convenient ways. As scholars like Thomas King and Philip Deloria have shown us, however, real-life, perhaps “inconvenient” Indians are all around us, living lives that don’t fit the white-washed versions we continue to prefer.  As “Americans” convincingly argues, we should spend less time recirculating the myths we’ve created about Indians and more time listening to the stories they are telling us themselves.

Major thanks to two marvelous mentors at the NMAI, Dennis Zotigh and Renee Gokey. Any errors in the above account are mine, but their teaching inspires all writing I do in connection with the museum’s important work.