Hanging side by side above the imposing entrance to the southwest hall of the Library of Congress (LOC), three large banners announce exhibits currently open there.

One is a permanent fixture at the LOC.

A recreation of Thomas Jefferson’s impressive home library allows visitors to enter a circle of shelves showcasing the beautiful leather-bound volumes which he treasured in his lifetime and which today mark both his intellectual prowess and the wealth (including that embodied in slaveholding) that supported his personal agency.

The two other exhibits now sharing the second-floor hall focus on women. Their place in US history is presented quite differently from Jefferson’s.

“Shall Not Be Denied” &”Rosa Parks”

Like the Presidential library display, these two exhibitions honor American civic leadership. However, both women’s exhibitions additionally emphasize challenges bravely faced, if never fully overcome. Indeed, in “Shall Not Be Denied” and “Rosa Parks,” the Library of Congress forcefully records gender-based limitations to American women’s lives, casting those often-marginalized stories as claiming attention on a par with Jefferson’s. Yet, despite foregrounding historical constraints that have impeded US women’s social authority, both exhibits ultimately tell inspiring stories. Taken together, they present a compelling counter-narrative to traditional male-dominated histories of American leadership.

When I spent time visiting the two exhibitions this week, I couldn’t miss the powerful irony of the LOC’s placing African American “Rosa Parks: In Her Own Words” just past the reverent staging of a slaveholding Founding Father’s highly embossed books. Thus, for instance, Parks’s visionary language, made visible in multiple large panels and bold font, repeatedly invokes the national shame of slavery, as in this stirring assertion: “I want to be remembered as a person who stood up to injustice, …and most of all, I want to be remembered as a person who wanted to be free and wanted others to be free.” This theme of seeking full freedom pervades the Parks exhibit. 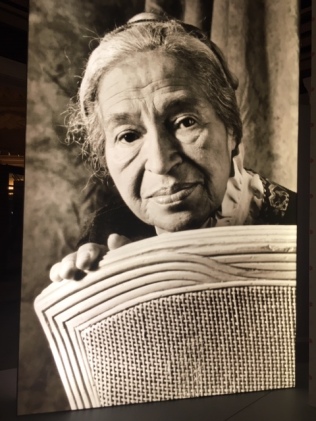 Nor would anyone familiar with Jefferson’s role in composing key documents that defined America’s system of government miss another telling irony. Repeatedly throughout “Shall Not Be Denied: Women Fight for the Vote,” diverse women’s voices call founding figures like Jefferson and later Presidents (like Woodrow Wilson) to task for failing to craft a truly inclusive vision of all citizens being “created equal.” 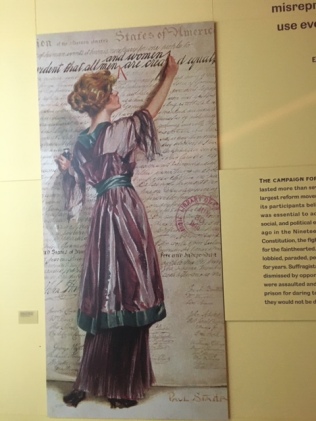 We see this theme underscored in the exhibition’s opening showcase of videos interspersing images of suffragettes from the late nineteenth and early twentieth centuries with contemporary women—diverse in multifaceted identity features– speaking directly to every visitor about the long fight for suffrage as a living legacy. And this approach—underscoring the centrality in the suffrage movement of women beyond the familiar white figures like Elizabeth Cady Stanton and Susan B. Anthony—appears prominently throughout the “Shall Not Be Denied” exhibition. 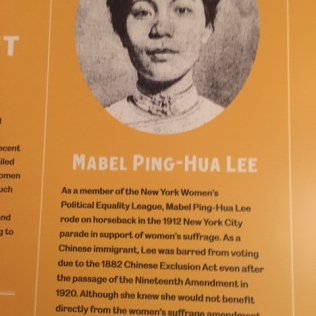 As we reach the turn between Black History Month and Women’s History Month, the 100th anniversary of the 19th amendment’s ratification provides a worthwhile framework for noting important connections between these two annual efforts to honor stories too long under-valued in dominant accounts of American history’s milestones. In that context, the Library of Congress’s “Rosa Parks” and “Shall Not Be Denied” exhibitions offer a bridge connecting Black History and Women’s History through shared content elements that are reinforced by the two projects’ physical juxtaposition. Each of these exhibitions spotlights women’s civic leadership and their persistence in claiming social agency even when facing oppression. Positioning them in the same wing of the LOC, at the same time, meanwhile, emphasizes that a deep understanding of the role such legacies play requires us to take into account both the gender-based experiential commonalities in women’s history and the significant differences associated with other identity factors—especially race. In other words, drawing from the influential work of scholar Kimberlé Crenshaw, we might say that central insights embodied in the linkage of these two exhibitions derives from their having taken an intersectional approach.

Both “Shall Not Be Denied” and “Rosa Parks” use overarching design strategies and the incorporation of specific artifacts to create their intersectional emphases.

The “Shall Not Be Denied” exhibit combines highly visible spotlighting of women of color as leaders in the suffrage movement with what might be termed an interweaving strategy emphasizing the ongoing interactions between whites and women of color throughout the many decades leading up to the 1920 amendment’s passage and beyond. Thus, on the one hand, multiple specific displays within the exhibition call special attention to ways that individual women of color made crucial contributions to the movement at key moments. Since I was visiting the LOC just before the turn from Black History Month (February) to Women’s History Month (March), and because much of my own research and teaching focuses on African American women, I was particularly excited to see such figures as Frances E. W. Harper, Ida B. Wells-Barnett, Sojourner Truth, Mary Ann Shadd Cary, Harriet Forten Purvis, Mary Church Terrell, and Sarah Parker Remond directly honored, at specific points in “Shall Not Be Denied,” for their vital contributions to women’s determined fight for the franchise. (While the exhibition also honors white women like Stanton, Anthony, and Carrie Chapman Catt, this is one historical record that is equally intent on shining a very bright spotlight over the leadership of Blacks and other women of color.) 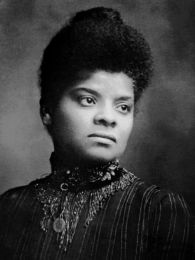 However, equally important, it seemed to me, were the many points in the exhibition where I saw examples of suffrage-movement-related interactions (including times of productive collaboration) between whites and women of color. For instance, one prominent photo shows Black and white women marching together to call out Woodrow Wilson’s opposition to expansion of suffrage. Similarly, the occasion of my home state of North Carolina’s official embrace of suffrage depicts a mixed-race group of major women leaders. 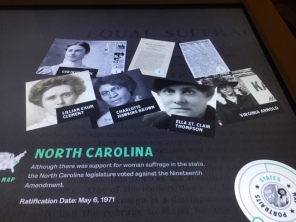 As part of this interweaving strategy, “Shall Not Be Denied” takes on the responsibility of critique by recording examples of Black women being marginalized by their white “sisters,” as when some white leaders of the movement tried to placate groups of southern women who opposed giving full Civil Rights to Black women–and men. Thus, this exhibition underscores the point that inclusivity in history-telling should not deny difference–even the most uncomfortable-to-confront examples.

The closing display in this multi-faceted exhibition reaffirms its commitment to a critically informed inclusivity and intersectionality through a strategically sequenced series of video clips. Honoring more recent examples of women’s civic leadership, this video collection conveys appreciative commentary on the contributions of 19th-century suffragettes and subsequent generations being articulated by prominent 20th- and 21st-first century heirs–many of them “firsts” in their successful claims to political influence. Accordingly, the first woman to serve on the Supreme Court–Sandra Day O’Connor–explicitly acknowledges her debt to brave fights for the franchise by women preceding her own era. Another proud Texan, Barbara Jordan, bitingly critiques “Founding Fathers” for excluding women from the nation’s foundational documents and celebrates the role of later legislative and judicial interventions for bringing women into full citizenship–a process which Jordan marks as, in her case, needing to incorporate race as well as gender.

Rosa Parks: In HER Own Words

“Rosa Parks: In Her Own Words” mirrors the LOC’s narrative of the suffrage movement by underscoring Parks’s womanly identity along with her role as a race leader.

Appropriately, of course, this exhibition revisits Parks’s iconic role in the Civil Rights Movement. Thus, the now-familiar photograph of her seated on a Birmingham bus celebrates her courage and commitment in launching the pivotal 1955 boycott. But the LOC has also gathered an array of additional artifacts–including lesser-known images of Parks and various family members and colleagues, as well as numerous displays of “her own words” from speeches, interviews, and private correspondence–to extend consideration of “her own” history into an account emphasizing her gendered as well as her racial identity.

One element in that strategy involves expanding exploration of Parks’s life beyond her famous connection to the 1950s’ boycott to work in later years, such as her service in the Congressional office of Detroit-area representative John Conyers, Jr. Another equally engaging aspect of the exhibit situates Parks as a woman with strong family ties and personal friendships: her early Alabama years as Rosa Louise McCauley, her married life with beloved husband Raymond, her time attending the Highlander Folk School in Tennessee, her sustained commitment to uplifting youth in an institute co-founded with Elaine Steele. Here, as with the “Shall Not Be Denied” companion exhibit, the LOC does not shy away from painful truths, such as the heavy price Parks and her family paid (including facing severe poverty when no one in Alabama would employ her post-boycott) for her Civil Rights leadership. 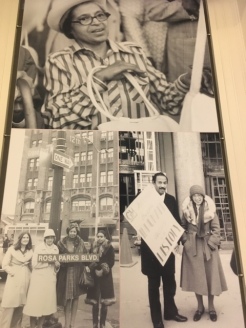 These core pieces of Parks’s life–sometimes invisible given a tendency to freeze her personhood into the single moment of the Birmingham boycott–become vibrant signs of a more complex “Rosa Parks: In Her Own Words” through display items like a handwritten letter signed “Your devoted wife” and family photos re-situating her womanhood as central to her sense of self.

Takeaways from the LOC Exhibits

As an English professor with additional affiliations in two interdisciplinary programs (Women and Gender Studies [WGST] as well as Comparative Race and Ethnic Studies [CRES]) at TCU, I took away many useful lessons from my recent LOC visit. Certainly, I learned new content about the history of American women’s fight for the franchise, Civil Rights, and an equitable place in US society. But I also took away lessons about how to tell such stories through an intersectional lens.

Later in March, the WGST program will be sponsoring a symposium in connection with the 100th anniversary of the ratification of the 19th amendment. 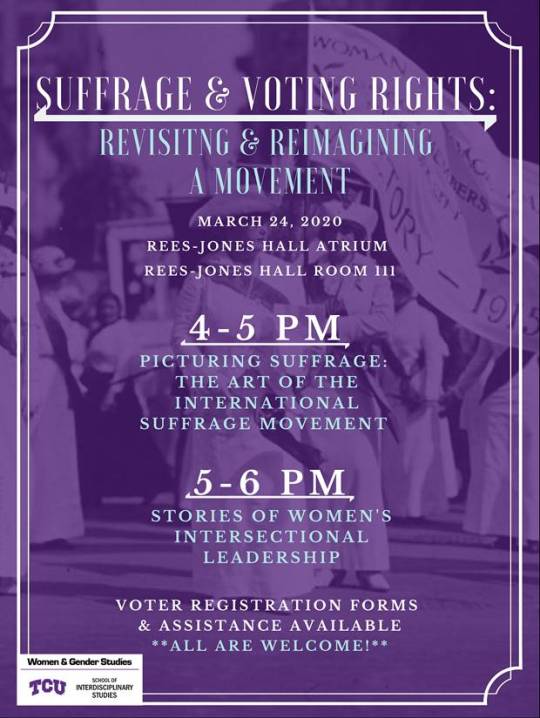 Though we don’t have the vast archival resources of the Library of Congress at our disposal, we too are working to frame our program through an intersectional lens–both in our presentations on March 24 and in an associated display through partnership with the TCU Mary Couts Burnett Library that will remain in place through most of the spring term.

We invite anyone able to visit TCU for the specific afternoon/evening event to join us. And though our own exhibit will naturally be more modest in scope than the LOC’s, we will be doing our best to apply related approaches for honoring the complexity and diversity of the suffrage movement and its multi-faceted legacies in American culture.